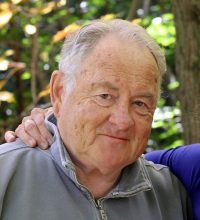 Max Ramsland and his family are overwhelmed by the love of friends, and the kindness of strangers in helping us all struggle and then come to peace, with dignity and grace, the devastating effects of ALS, and the end of his life.

Max was born and raised in Duluth. He graduated from East High School in 1958. He was an accomplished hockey player starting with the Glen Avon midget hockey team, then as co-captain of the East High School team, and played for UMD his freshman year. He pursued a place on the national hockey team; a dream that was dashed by a broken hand and wrist. Later on in life he co-coached, with Bob Mars, the Duluth midget Aerials for two years in the 1970s, and coached the St. Scholastic hockey team in 1976, when they won the NAIA national championship.

Max met his soulmate, Betty, in 1961. They complimented each other perfectly. Together they returned to Duluth to finish college at UMD. After graduating, Max moved to Washington, DC, and entered the Equitable Life Assurance Society’s accelerated real estate appraisal program for valuing the company’s investments. After graduating from their two year program he became an independent commercial real estate appraiser. Max and Betty returned to Duluth in 1971, to set up his appraisal company and settle down. In 1974, Max achieved the Member of the Appraisal Institute (MAI) designation. He was the youngest MAI of the national Appraisal Institute at that time.

During Max’s lifetime in Duluth he successfully established the firm of Ramsland & Vigen, Inc., real estate appraisers. He had a deep commitment to Duluth and served many of its institutions as Chairman of the Board of St. Luke’s Hospital, on the board of the College of St. Scholastica, the Kitchi Gammi Club, Marshall School, Bayfront Park Development Association, and Chair of the Duluth Graduate Medical Education Council. He was on the corporate member board of Blue Cross/Blue Shield, Chairman of Minnesota’s Higher Education Facilities Authority, President of the Duluth chapter of the Appraisal Institute (formerly known as the Society of Real Estate Appraisers), and on the boards of the Minnesota Taxpayers Association, and Minnesota Public Radio. He was associated with the Counselors of Real Estate (CRE), the American Society of Appraisers (ASA), and the Real Estate Counseling Group of America.

Max was self-taught in many areas of higher mathematics including calculus, statistics, and econometrics. He frequently published in national appraisal journals on these topics, and on regression analysis in relation to the valuation of real estate. He also published and was nationally known for his knowledge on asbestos and its risks, diminution in value, and remediation in commercial buildings; the most famous being the IDS tower. Max nationally appraised shopping malls and department stores, and loved solving the complex issues involved in tax litigation. He was an expert witness in these matters. He loved his work, and worked until his death. Max lived a good life with hard work and play: skiing, sailing, bicycling, and traveling with Betty and friends.

He took great joy and was so proud of his family. He is survived by his wife, Betty, son, Austin (wife Natalie), daughter, Kat Ramsland (husband Tony Nephew), and sister, Marcia. He is also survived by his granddaughters, Inga and Arden, ages 3½ and 15 months. When asked how he would like to be remembered, he simply said “as the father of Austin and Kathryn.” He will be remembered as much more than that. He leaves a legacy of graciousness, civility, kindness, and compassion for his fellow man, along with an infectious smile and twinkle in his eyes. He will be remembered for how we felt in his presence: loved unconditionally and supported unequivocally.

A gathering in remembrance will be held at the Owens home on November 16th at 2:00. All friends are invited to celebrate knowing this amazing man.

Memorials can be made to Duluth’s Life House, the Duluth Art Institute, or Doctors Without Borders in Max’s honor.