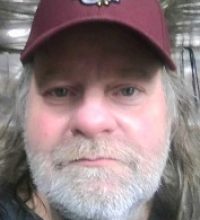 Bill Douglas Wolz passed away from natural causes on Saturday, April 4, 2020 at his home. He was 60 years old.

Bill graduated from Proctor High School in 1977 and joined the Navy for a short time. Bill earned his Bachelor of Science degree in 1995 and went on to earn his Master of Science degree in 2001. He was an adjunct physics instructor at UMD and previously at Lake Superior College. He was planning to retire this spring.

Bill was a talented, intelligent, funny and kind-hearted man. When he was younger, he and his friends formed a local band, LASH, and played at many venues. Bill earned his nickname “Screamer” for his signature style of singing. He was a self taught guitar player and could play incredible guitar solos. He loved to share his knowledge with his students, friends, and family. He was passionate about science and the earth, conducting his own experiments and living off the grid. While he loved to visit and make people laugh, he really enjoyed solitude and would spend long stretches of time alone in the woods long before social distancing was recommended. In his younger days, he rode his bike, hiked in the woods and spent his time exploring in his beloved Jeep. His later years were spent more at home, finding water sources using dowsing rods and spending time getting to know, naming and feeding the critters at home, ranging from a wolf spider to deer. The animals trusted him and he has pictures of squirrels and birds in his hands eating.

Bill was preceded in death by his grandparents, many aunts and uncles, his parents and too many friends to count.

He is survived by his step-father, George Clark of Proctor, his brothers, Steve (Roberta Sue) of Lincoln, Nebraska, Ed (Cindy) Wolz of Oak Ridge Tennessee, and John of Seattle, Washington and sisters, Sharon McIntosh of Esko, Mn, Linda (Jeff) Hare of Duluth, Mn and Susan Doller of Superior, Wi. He has 12 nieces and nephews and 6 grand-nieces and nephews.

Bill did not have any children of his own. He was concerned with leaving a legacy behind. He created a Youtube channel with several videos of his band and more recent performances of his songs. He also created videos meant to entertain and share ideas.

Bill wanted to be cremated. At this time, there will not be a service due to crowd limitations with COVID-19. Please share stories and memories on the online memorial. In lieu of flowers, cards or anything else, the family asks that you buy a bag of critter food and spend some time in nature, honoring Bill. He would have liked that.