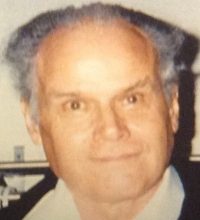 Willis Conley Adams, age 80, of International Falls passed away September 18, 2017 at St Mary’s Hospital in Duluth, after suffering a stroke.

Conley, as he was known, was born December 21, 1936 at Conley Hospital in Kansas City Missouri. The only son of Willis Raymond and Edna Cecile (Ocker) Adams. He grew up in nearby Cameron Missouri, and graduated from Cameron High School in 1955. Conley traveled to northern Minnesota to get away from the hot Missouri summers.

On December 1, 1961, he married Frances Regal in International Falls at the Covenant Church. He retired from his employment at Boise Cascade in 1997.

Our family wishes to especially thank the ICU and Pallative Care Nursing staff at St Mary’s Hospital for their gentle care. Also, special thanks to Conley’s friend and pastor, Ed Natysin, of the Covenant Church in International Falls.

A memorial service will be held at a later date.