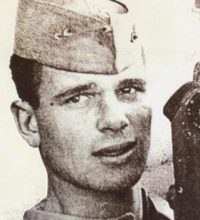 Bill graduated from Duluth Cathedral and joined the Marines in 1945. He served aboard the cruisers Canberra and Atlanta, later he was an instructor at San Diego’s 11th Reserve Tank Battalion. He met his wife Lois at UMD and married her when he was recalled for the Korean War. Staff Sgt. Lee was attending advanced infantry training in Camp Pendleton when he was pulled off the embarkation roster to work as a code analyst for General Erskine until his discharge.

The Lees were members of St. Lawrence, and he served on their finance committee for many years. He also spent nine years teaching skiing at Spirit Mt. For the Superior Challenge Center. Bill was a past Grand Knight of the Knights of Columbus. He was especially proud of the honorable green fez given as a ‘thank you’ from Shriners to all the Knights of Columbus for selling donated brats to treat all children at the Mpls Shriner Hospital for children. That hospital saved the life of Bill’s nephew after he was severely burned as a child.

Bill’s only job for 31 years was as a salesman for Taystee Bread.

He is preceded in death by; his parents, sisters Madeline, Lorraine, brothers Robert and Paul.