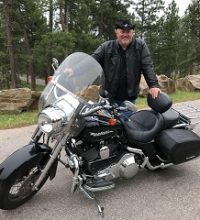 Thomas “Tom” Howard Anderson, 65 of Chanhassen MN departed this world too quickly on September 11th 2020. He was a determined warrior in his second battle against cancer, fighting for more time with his family, friends, and a plan for retirement to be near his brothers.

His joys in life included spending time with his three grandsons, hanging out with his sons and wife, riding in his Jeep or on his Harley, and being with friends. He leaves a legacy of hard work, fond memories, and love that is still felt by all who knew him.

Some of those that are going to miss him most include his wife Stephanie, sons Chris (Girima), Ryan (Emily), Seth, brothers Charles (Stephen) and Glenn, and grandsons, Odin, Thorin, and Lucien. Tom was proceeded in death by his mother, Anneliese Bush & father, Charles R. Anderson. Due to the pandemic a private service will be held in coming weeks. However, a celebration of life that Tom so deserves where his friends and family can remember him together will be held in April in memory of his birthday.