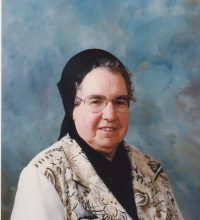 Sister Cecile LaForest, OSB, age 95, died July 31, 2014, at St. Scholastica Monastery. She was born to Louis and Philomene (Brusseau) LaForest on August 18, 1918, in Negaunee, Michigan. Sister Cecile was in her seventy-seventh year of Monastic Profession.

The middle child in a family of five, Sister began her journey with the Duluth Benedictines when, after an all-night train ride from the Upper Peninsula to Duluth, she enrolled as a high-school sophomore at Villa Scholastica at age fourteen. She completed her high school education, and entered the Benedictine community as a postulant on August 29, 1935. She professed her Triennial Vows on July 11, 1937, and her Perpetual Vows on July 11, 1940. She earned a Bachelor of Arts degree in Elementary Education from The College of St. Scholastica and later earned a Master’s Degree in Educational Curriculum and Administration from the University of Minnesota Duluth.

Sister Cecile’s sharp intellect and lively personality has carried her through fifty-four years of ministry in elementary education with great aplomb. She began as an elementary school teacher in 1937 at Our Lady of Sacred Heart School in Cloquet, and moved to St. Clement’s, St. James, St. Margaret Mary, and Sacred Heart in Duluth, and the cities of Virginia, Eveleth, Grand Rapids, Aitkin and Chicago. She also served as Principal at Marquette School from 1953-59 and at St James School from 1959-63. She served as Supervisor of Elementary Schools in the Duluth Diocese from 1969-1981, and was Principal of St. Joseph’s School in Grand Rapids from 1973-1985.

Sister Cecile served as Director of Religious Education at Resurrection Parish in Eveleth from 1986-1991. She then moved to St. Ann’s in Duluth where she was a resident, a staff member and sacristan until 2008 when she returned to the Monastery and became a resident of Benet Hall. Aside from her impressive service in education, Sister was also a gifted writer and wrote Hillside Handmaid, a beautiful account which describes Sister Alicia Panger’s ministry in Duluth’s Hillside neighborhood.

Sister was preceded in death by her parents and siblings, Clifford LaForest, Gladys Schmeltzer, Della Marks, and Marcella Belpedio. She is survived by the Sisters at St. Scholastica Monastery, a niece, nephews, cousins and many dear friends.

Her Wake will be held on August 6, 2014, in Our Lady Queen of Peace Chapel at St. Scholastica Monastery at 9:30 a.m. The Mass of Christian Burial will follow at 11:00 a.m. with Father Brian Schultz presiding. The Rite of Committal to the Earth will be at Gethsemane Cemetery. Memorials to St. Scholastica Monastery are preferred. Arrangements are by Affordable Cremation and Burial.