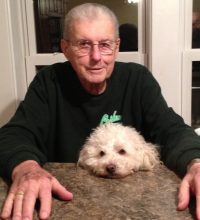 Russ was born February 6, 1931 to Sidney and Florence Woods in Duluth. He grew up in West Duluth and attended Denfeld High School, graduating in 1949. Russ began his 36 year career in 1950 with the DM&IR Railroad. He was able to retire at the age of 55 and enjoyed over 28 years of retirement along with his wife, Joanne.

Russ and the former Joanne Schram were married on May 24, 1952. Russ built a home in Piedmont Heights and he and Joanne lived there throughout their marriage, until recent years. Russ and Joanne also owned a cabin on Kauppi Lake in Cotton, where they entertained family and friends for decades. They also travelled all over the United States, from Florida to Alaska, many times with his friends during their retirement. Russ honored his Irish heritage when he turned 70 by travelling to Ireland with his daughter and family, where he kissed the Blarney Stone.

Russ was a member of St. Lawrence Catholic Church and the Knights of Columbus Council 6783. He also belonged to the Proctor Moose Lodge, the All AmericanClub and the Lake Avenue Loafers.

Russ was an all-around good guy who helped many friends, neighbors and families throughout the years. To his daughters he will always be, “the best Dad ever,” who was always there wherever and whenever they needed him.

He is preceded in death by; son John in 2011; his parents; sister Eleanor, her husband Walter Carlson; and nephew Mike Carlson.