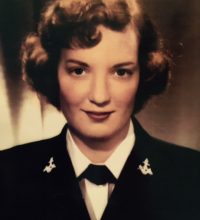 Memorials may be made in her memory to the Women in Military Service Memorial, 200 North Glebe Road #400, Arlington VA 22203.

Rose Marie Walker, 83, left earthly struggles behind on November 8, 2016 in Duluth. She was born August 10, 1933 in Littlefield, Texas to Joel Wesley Page and Alpha “Betty” Page (nee Lynn) . A true child of the depression, she lived through the dust bowl years in the Texas panhandle. Her happiest childhood years were spent on Farm 14 of the Ropesville Resettlement Project, a FDR new deal. In the early 40’s, her family made a Grapes of Wrath move from Texas to California’s central valley, where her family initially lived in a migrant farm worker tent camp. Rose made a dime a day picking apricots.

Rose graduated from Modesto High School in 1951 and enlisted as a WAVE in the US Navy. She served as a hospital corpsmen until 1953. She later completed her RN degree and a MBA, working as a nurse until her retirement. She gave love, care and comfort to the sick and dying in the many years of her nursing career.

She married Walter Ellis Walker and they lived in St. Louis, MO until his retirement from Ford Motor Company, after which they lived in Granbury, Texas until his death in 1992. She returned to California for several years before finally moving to St. Augustine, Florida where she lived for 16 years with her youngest daughter, Kelly, and grandson. The final two years of her life were spent in Duluth, close to Kim and Wayne and their daughters.

We will remember mom for her love and devotion to her family, her laughter and love of dancing, the evenings of guitar playing with her brothers (especially songs Wildwood Flower and Under the Double Eagle), her love of interior decorating and how she always appeared in public made up and perfectly dressed. Mom always sang the song “I’ll Share My World with You” to our father and we know they are together again in that place where “God shall wipe away all tears from their eyes; and there shall be no more death, neither sorrow, nor crying, neither shall there be anymore pain.” They are not gone, only gone ahead.

She was preceded in death by her loving husband, her parents, and brothers C.W., Wallace and Donny. She is survived by her sister Faye and brothers Kenneth (Sue) and Jerry (Janie). She leaves behind her children Kimberly (Wayne), Kelly (Kelly), Wendy and Robert along with grandchildren Kristin, Kathryn, Walker, Ian (Brandi), Andrew and Eva (Josh), and 9 great grandchildren.

Special thanks to Dr. Mark Plachta and St. Luke’s Hospice, to Heritage Haven and their staff who welcomed mom in the last 12 days of her life, especially Anno Freeman, RN, whose devoted care and compassion to mom and our family are a credit to the nursing profession.

Mom chose to be cremated with no memorial service. As she requested, her ashes will be spread at the West Texas farm of her childhood where she can “blow with the tumbleweeds.” Memorials may be made in her memory to the Women in Military Service Memorial, 200 North Glebe Road #400, Arlington VA 22203.