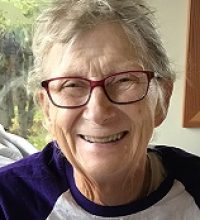 RobBee Lapp set down her earth-loaned form and returned her waters to the stars on January 13, 2021, within the infinite, creative darkness of the new moon.

Roberta Nadine Green Lapp was born June 22, 1941, overlooking the Des Moines river in Des Moines, Iowa, to Telura Nadine Marquis Green and Robert James Green. She grew up in Greenfield, Iowa, with siblings Mark, Vivian and Lucille, graduated from Greenfield High School, and attended Iowa State University. She married Charles Joseph Lapp on December 27, 1960, and moved frequently through Chuck’s grad school and career years. Three children and many moves later, RobBee completed a Bachelor of Science degree at the University of Minnesota in Home Economics Education, with an emphasis in food and nutrition. Education and a deep intellectual life played an important role in RobBee’s life and work. Her parenting included providing a diverse collection of books, lots of traveling, hosting exchange students, and supporting the kids’ many activities.

RobBee’s passion for peace, equity and nutrition manifested in diverse projects, including local food access, a women’s shelter, women in religious leadership, and education access for school-age mothers. She and Chuck volunteered in community empowerment projects with the Institute of Cultural Affairs locally and nationally, and internationally in the Marshall Islands, Egypt, and Chile. RobBee’s passion for writing manifested in community reporting, editing, and poetry, honing her craft in many writers’ workshops.

After Chuck retired, they moved from the midwest to “life on the beach” on the Gulf Coast. RobBee focused on spirit, peace, and healing, participating in and establishing circles and Grandmother Gatherings in Arizona, the Gulf Coast, the midwest Heartland, and Lake Superior.

Moving to Hood River, Oregon after Chuck’s passing in 2005, RobBee deepened her expression of honoring the Waters, Mother Earth, and lifeways of indigenous communities. Through political action and ceremony, she focused on reducing use of fossil fuels and nuclear power, protecting ecosystems, and creating water wheels honoring the waters. Always up for a new challenge, RobBee benefitted from her yoga practice in learning to freedive and trained weekly with son Wes, joining him and granddaughter Zan in international competitions in the Caribbean. RobBee was active in caring for Zan, as she was earlier for grandsons Nathaniel and Nicholas. RobBee was known for her singing spirit, participating in Voci and the Threshold choirs, in Grange and UU communities, and the Mama Bears circle.

Retiring from home ownership in 2018, RobBee moved to Duluth, Minnesota to live with daughter Cynthia and partner Randy. RobBee relished returning to the lakes and pines of her childhood summers in Minnesota, and later cabin life with sisters and family on Woman Lake. RobBee became a dog’s best friend, walking in all weather with Mako through meadows and woods. She trained in advanced yoga and meditation, sustaining a daily practice supporting strength and equanimity. RobBee continued her advocacy for water, climate, and equity, with local and national groups. She was a passionate member of Duluth’s UU community and sang in the UU choir. As an integral member of Starry Skies Lake Superior, she advocated for honoring the night sky and the natural rhythms of light and darkness.