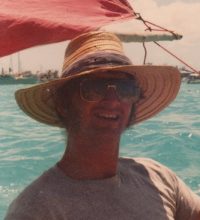 Bob graduated from Hermantown and Bemidji State College with a major in physical education and a minor in mathematics. He played on the 1966-67 Bemidji State’s undefeated Men’s Basketball Championship team.

Bob’s mind and body approach to life led him to various professional expressions including teaching geometry and coaching at the Biwabik high school; teaching adaptive physical education at the UDAC; demolition work with Ilse Engineering; and building aluminum and steel sailboats that ranged from 34 feet to 80 feet.

His love of all things nautical led him to traveling the Bahamas and Turks and Caicos in the 34 foot aluminum boat he built with his wife. They lived aboard their sailboat in the Florida Keys for over a decade.

He was a lifelong advocate for peace and social justice, which informed his decision to file for conscientious objector status during the Vietnam War. He won his case before Judge Miles Lord.

Bob was a highly creative person with a curious mind, a gentle demeanor and a keen wit.

He will be sorely missed.

He is preceded in death by his parents and brother, Richard.

A Celebration of Bob’s life will be announced in the summer.