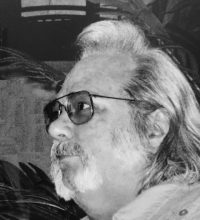 Richard George Larson, 63, of Esko, MN, passed peacefully into his Savior’s presence surrounded by his loving family members at St Luke’s Hospital on Monday, November 9, 2015. Richard was born September 2, 1952 in Duluth, MN to George and Estella Larson, the oldest of 9 children.

Richard graduated from Esko High School in 1971 and then went on to Duluth Area Vocational Technical School (now Lake Superior College) where he was awarded the American Welding Society Scholarship and excelled in the Welding program. He later returned to Lake Superior College and in 1993 obtained his LPN degree. He was chosen by the instructors as “Outstanding Student of the Year”.

He worked as a welder and night steward for Frasier Shipyard from 1972 to 1981. He was employed as Driver/Fleet Manager for a fledgling delivery company known as Peregrine Two-Way after which he worked as a carpenter building doors/windows at The Radford Company until 1991. It was at this time he changed careers to nursing as his desire was to help others. Upon obtaining his LPN degree, he went to work at the Cloquet Nursing Home and subsequently to Interfaith Care Center (Carlton Nursing Home) until July 2007, when he retired due to health issues.

Richard was a very social person and was tender hearted towards those less fortunate than himself. He was a trusted mentor to his co-workers, friends and family members. He had numerous talents and was eager to share his vast knowledge with others. He spent time as a certified welding instructor at the vocational school. He helped as an advisor with Boy Scout Troop 152 during the late 70’s. He enjoyed fishing, hunting, dog training, archery league and was also a charter member of the Chess Club of Cloquet. An artist at heart, he became an avid painter later in life and member of the Duluth Art Institute. He spent many hours painting/drawing with his mother and sister Carla.