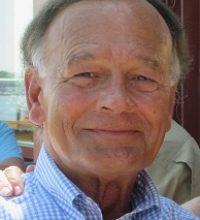 Paul graduated from Duluth East High School and attended UMD before working full-time at Columbia Clothing, Duluth, Minnesota, where he discovered his passion for selling men’s clothing which became his career. He moved to Hibbing, Minnesota, in 1978 where he worked for Sachs Brothers until becoming co-owner and manager of Schroff, Inc. in 1982. Paul was a member of the Board of  Directors, Mesabi Regional Medical Center in Hibbing, from 1983-1990. He was a member and served as President of the Hibbing/Chisholm Breakfast Rotary Club. Paul moved back to Duluth with his family in January, 1991, after being diagnosed with Lyme Disease. He was an active member of Glen Avon Presbyterian Church where he served as a Deacon, Elder, and Covenant Partner for several youth. In recent years he enjoyed volunteering at the Damiano Center where he loved serving desserts monthly.

Paul’s favorite activities were fishing, hunting, golfing, and spending time with family and friends. He was famous for his fish fries and partridge stew. He loved to travel, especially to Mexico, and enjoyed cruises to Alaska and the Caribbean. He and Marci traveled to Key West, Hawaii, and Scotland to visit daughter Amy and celebrate special events. He cherished time with Christa’s Bernese Mountain Dog, Sampson. Paul was known for his wit, humor, generosity, and kind and compassionate spirit.

Paul dealt with significant health issues for many years with a deep reserve of courage, optimism, strength, and grit. His belief was “Be stronger than the storm.” Paul was preceded in death by his father, Charles W. Hoff, and father-in-law, Albert J. Santa. He is survived by his wife, Marci, daughters Amy and Christa; mother, Shirley (Johnson) Hoff; brothers Jim (Ruth) Hoff and Art (Deb) Hoff; mother-in-law, Helen Santa; brothers-in-law Rick (Sharon) Santa, Rob (Deb) Santa, and Jim (Marcia) Santa; and several cousins, nieces, and nephews.