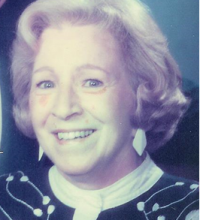 A remembrance service for Onalee and Charles Kramer will be held in Lake City, MN upon completion of her bequest to the Mayo Clinic in approximately 1 year.

She grew up in Minot, ND. During WWII, she trained as an RN in the Nurse Cadet Corps at the University of Minnesota School of Nursing and was an active lifetime member of the U of M, School of Nursing Alumni Association. Onalee worked as an obstetric nurse at Mt. Sinai, as a nursing supervisor at Fairview Southdale Hospital, and as an adjunct nursing instructor at St. Olaf College, Northfield, MN. With John R. O’Hearn, they raised their family in Richfield, MN where they were both active in American Legion Post 435. She retired to her family home in Lake City, MN, where she was active in the Wabasha County Historical Society, the Lake City Garden Club, the hospital auxiliary and the Congregational Church. She was an avid bridge player. She married Charles Kramer and they enjoyed visiting family and escaping winters while traveling in their motor-home. Her contagious smile will be sorely missed.

She is preceded in death by her brother, Jim

A remembrance service for Onalee and Charles Kramer will be held in Lake City, MN upon completion of her bequest to the Mayo Clinic in approximately 1 year.