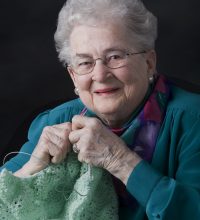 Nancy Robbins Willard Fifield, 89 years, died at St. Luke’s Hospice Duluth on February 11, 2014, after a brief illness. She was born the third of four children to the late Dorothy and Grant Willard in Mankato, Minn., on November 21, 1924. A graduate of Mankato High School, she earned an undergraduate degree from MacMurray College in Jacksonville, Ill., in 1947. She met a young medical student named Malcolm “Mac” Fifield at a party in 1946, and the two were married in December 1947. The union was a happy one, lasting more than sixty years and producing seven children.

Everyone who met Nancy remarked on her sweet disposition. She was kind to all: friendly and bubbly. She was a devoted mother, grandmother and great-grandmother who reveled in the lives of her family, and was never happier than when sitting in a chair, knitting and surrounded by her “brood.” She counted among her children several international exchange students and other special kids who had lived under her roof now and again. She loved living in the Northland: sailing on Lake Superior, organizing picnics on the shore, taking her kids to Park Point, or hiking up Hunter’s Hill to marvel at the autumn foliage.

Nancy was involved in many charitable and volunteer activities in Duluth, including the Junior League, of which she was once named Sustainer of the Year; Meals-on-Wheels; AFS Intercultural Programs; the Duluth Women’s Club; P-FLAG; and P.E.O. In 1978 she was named “Woman of the Year” at the Port Cities Luncheon. She was a very active member of Pilgrim Congregational Church, arranging flowers weekly for the Sunday service and singing in the choir. Her artistic talents included creating beautiful pieces of crewel embroidery and knitting countless sweaters, Christmas stockings, and baby afghans. Her hands were always busy.

Nancy loved traveling and learning. She and Mac visited Australia and New Zealand, Mexico, Brazil, Africa, Europe, many parts of the US and Canada. In retirement, they enjoyed traveling around North America in their motor home, taking part in Elderhostels, and making new friends. And they loved attending UMD’s University for Seniors.

Her family would like to thank the staffs of Ecumen Lakeshore and St. Luke’s Hospital and Hospice Duluth. In lieu of flowers, her family asks that memorial gifts be made to Pilgrim Congregational Church UCC (www.pilgrimduluth.org) or CHUM (www.chumduluth.org).