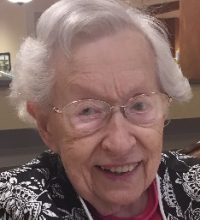 Due to the current situation, a celebration of life will be held at a later date.

Mae Iola Peterson passed away peacefully at the Benedictine Health Center on July 5, 2020, 12 days before her 98th birthday. Mae was born July 17, 1922 to Kristine (Hedin) and Gustaf Nordin. Mae graduated from Central High School in Duluth in 1940. She married Charles Arnold Peterson in 1944 and together they raised five daughters.

Over the years Mae worked for the Bell Telephone Company, Zalk-Josephs, J. C. Campbell Co. and the College of St. Scholastica. Mae was active in theater and music performing with the Gilbert Theater, Duluth Playhouse, Duluth Superior Symphony Opera Chorus and Symphony Chorus, and the Duluth Light Opera Co. She was a member of Matinee Musicale, The Swedish Cultural Society and it’s Svenska Sangarna group, The Duluth Woman’s Club and Pilgrim Congregational Church. Mae was a member of the Sister Cities Commission and was a delegate to Ohara, Japan and Växjö, Sweden.

The family would like to thank the staff at Marywood and Benedictine Health Center for their kind and loving care of Mae for the past 18 months.

Due to the current situation, a celebration of life will be held at a later date. Memorials may be made to the Duluth Superior Symphony Orchestra or an organization of the donor’s choice.