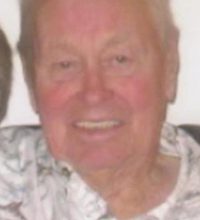 A memorial service will be held at noon on September 26, 2015 at the Fireside Inn, McGregor, with a reception to follow. Burial with military honors will take place at the Salo Cemetery.

Luverne M. (Bud) Lund, 88,of Aurora died on Monday, September 7, 2015 at St. Mary’s Medical Center in Duluth with family by his side.
He was born on February 1, 1927 in East Lake, MN to Alvin and Helen (Magnuson) Lund. He grew up on the family farm in Lawler and attended the McGregor schools. Bud was a proud WWII veteran. He recently served with other Last Man Club WWII veterans as grand marshals of the 2015 Aurora 4th of July Parade. Bud was an avid fisherman all his life. He had many highly valued fishing buddies; the most long-standing was his brother-in-law Lloyd Ernst.He was an active member of the Aurora VFW for many years and was the 1,000th member to join the Aurora Moose Club. Bud loved to socialize and was a great storyteller. He particularly enjoyed the Redeemer Lutheran Church breakfast club on Tuesdays.

Bud married Beatrice Randa on May 31, 1952 in East Lake, MN. Together they raised seven children.

After working as a heavy equipment operator and mechanic for many years, Bud started working as a mechanic at Erie Mining Company (LTV) in 1957. He retired as a foreman more than thirty one years later. Bud continued to operate the family farm for many years. In retirement, Bud enjoyed traveling, spending time with family, and playing dominoes with his friends. He spent many winters in Florida.

Bud was predeceased by his parents, sister Roselyn, his wife of 47 years Beatrice, and special friend Ruth English.

A memorial service will be held at noon on September 26, 2015 at the Fireside Inn, McGregor, with a reception to follow. Burial with military honors will take place at the Salo Cemetery. Services by Affordable Cremation & Burial, 218-491-7011, affordableduluth.com.