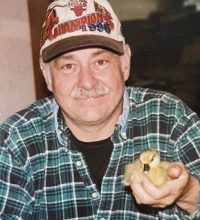 Lee’s family will be planning a celebration of life, with date to be determined.

Lee was born on May 11, 1947 to Leon and Betty Truty. He grew up in Morris, IL, lived in Chicago, IL (where he earned the nickname “Smiley”) and later moved up north where he lived in Baudette, International Falls and Indus, MN. In recent years, Lee lived in Duluth, MN at St. Ann’s Assisted Living.

Lee will be remembered by friends and family for his kind heart and his ability to make others laugh. Lee liked to joke about many things and included everyone in his jokes, including cashiers and waitresses. Some of his favorite jokes involved drinking whiskey, smoking cigarettes, and asking to borrow $20. He enjoyed spending time with family, Pete the pug, riding four-wheelers, boating, burning tires, watching old movies and trips to Chicago. Lee also enjoyed music and was a longtime fan of John Lennon.

Lee had a zest for life and knew how to enjoy the simple things. He always had time for family, friends and a good meal.

Lee is preceded in death by his mother and father.

Lee’s family will be planning a celebration of life, with date to be determined.