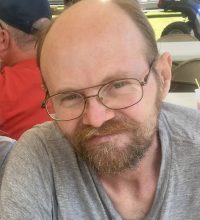 Kevin L. Swanson passed away January 9th, 2022 at Essentia Health in the Virginia Care Center in Virginia, Minnesota with his wife Shari by his side after a long battle with several health issues including dementia and lung cancer.

Kevin was born on June 28th, 1963 in Omaha, Nebraska to Marie (Hansen) and Roger Swanson, Sr. Kevin met his loving wife Shari in 1984 and they were joined together in marriage on March 3rd, 1986. Together with their first son Dusty they lived in Northern Minnesota and Fremont, Nebraska before settling in Taconite, Minnesota in 1990. There they raised two more children together, Josh and Janna. Kevin loved his job with Deer River Trucking/Trout Enterprises as a truck driver and was a devoted Teamster until his health no longer allowed him to. When not working Kevin would often be found in the garage “tinkering” on a car or finding something that needed to be fixed. He enjoyed the outdoors, hunting with his dad, Ranger riding with his family, and being the best at Nintendo 64.

At Kevin’s request no funeral service will take place and a private celebration of life will be held at a later date.