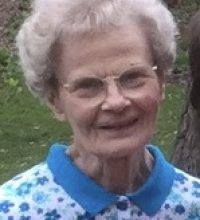 Judith E. Swartz, 85, stepped into the presence of her beloved Savior and Lord on Monday, March 9, 2020 in her home in Duluth, MN. Judith was born in Kenosha, WI on January 9, 1935 to Joseph and Ann (Sekuris) Zuffa.

She married Robert Swartz on January 29, 1955, and was his devoted wife for nearly 62 years. Judith worked as secretary, nursing assistant, and medical office manager until her retirement in Kenosha. Judith moved to Duluth in 2017. She especially enjoyed walking, baking for other people, and spending time with children. She loved people, and delighted in sharing God’s love for them. Her deep trust in the Lord produced a gentle peace and thankful spirit that impacted and encouraged those who knew her.

Judith is preceded in death by her husband Robert and her parents.

A private memorial service will be held in Duluth, and a celebration of life in Kenosha,WI is planned for this summer. In lieu of flowers or gifts, contributions in Judy’s memory to the Union Gospel Mission in Duluth (219 E. 1st Street, Duluth, MN 55802; duluth-ugm.org), or Hills and Hollers Ministries (2281 Lick Creek Road, Whitley City, KY 42653; hillsandhollers.org) would be welcomed.