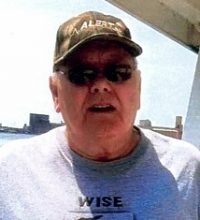 Per John’s wishes no services will be held.

John Greifzu Sr. passed away peacefully with family by his side on Wednesday, August 21, 2019 at St. Luke’s Hospital.

John was born June 27, 1951 to John and Doris Greifzu in Baltimore, Maryland. John enjoyed playing pinochle, visits with his siblings, riding ATV’s, hunting, fishing, being outdoors, watching old westerns, especially John Wayne, working with tools and metals in the garage and spending time with his grandchildren and pets. John had a wonderful sense of humor and will be sadly missed by those whose hearts he touched.

He is preceded in death by his parents, John and Doris Greifzu, and sister Johnette Greifzu.

Per John’s wishes no services will be held.