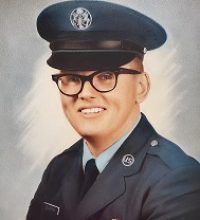 John D. Ellestad Jr., 71, passed away after a brief but courageous battle with cancer at St Lukes Hospital.

Born July 6th, 1948 to John Sr. and Mabel (Stavig) Ellestad in Two Harbors, Minnesota, John grew up in Knife River, MN and graduated from Two Harbors High School in 1968. After graduation he enlisted in the US Air Force. He was part of the 315th Tactical Airlift Wing/Combat Support Wing. In 1971 they were deployed to Vietnam, where he was stationed at Phan Rang Air Force Base with a title of Sgt/Food Service Supervisor/Cook, he also managed a Flight Kitchen on the Fire Depts Flight Line over looking 5000 meals served daily. Home from Vietnam, John married Lori Nelson on July 8th, 1972, they were then stationed at Minot, ND Air Force base until his discharge in 1975. John and Lori then settled in Duluth, MN where they raised their children and remain today.

John had a passion for airplanes and got into flying R/C planes 30 years ago. He was a member and president of the Duluth R/C Airplane Club through which he met and became very close friends with many of the club members who are more like family today.

He always had a quick wit and a ready smile. John will be dearly missed by his family and friends.

He is preceded in death by; his parents; and daughter Holly Kay.

A Graveside service will be held at 12:00 pm, Friday August 23, 2019 at the Duluth Veterans Cemetery, 4777, Hwy 53, Duluth. A Celebration of Life Luncheon will be held at the Proctor Moose afterwards.