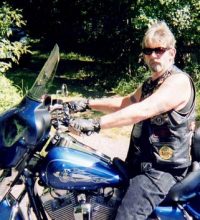 Jack “Wolfman” Porter, 69, passed away Friday, August 16, 2019, after a two year struggle with cancer. He was born December 29, 1949, to Glenn and Lela (Stewart) Porter in Detroit, Michigan, and graduated from Clintondale High School in 1967. Jack voluntarily enlisted in the Marines to serve in Vietnam, and was awarded the Bronze Star Medal with Combat “V” for his actions that saved the lives of many of his fellow Marines.

On July 17, 1981, Jack married Stefanie Vidor in Reno, Nevada, where they lived for 10 years and had their only child, daughter Tonya. The family moved from Reno to Minnesota, ultimately settling in Duluth.

Jack enjoyed the freedom of riding his motorcycle, either alone or with friends. He was a wonderful father and husband, the embodiment of the creed “Semper Fidelis” (Always Faithful).

Jack is preceded in death by his parents, brother John and sister Glenda.

He is survived and will be dearly missed by his wife of 38 years, Stefanie; daughter Tonya Porter of Duluth; sister Marsha Oslund of Virginia; brother Jim Porter of Cook; many nieces and nephews; extended family and friends.

The family extends its heartfelt thanks to the staff of St. Luke’s Hospice Duluth for the support and loving care that Jack received.