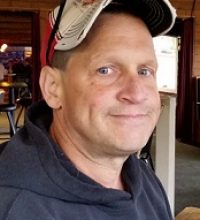 Glen Alan Solem, 55, passed away peacefully at St. Luke’s Hospital on January 8, 2020 after a 14 month battle with cancer.

Glen grew up in Gnesen Township and became a bricklayer for Local Union #3 at the age of 23. Glen met his wife Delia (Scharnott) in March of 1991. They settled down in Twig (Saginaw) Mn in 1994 where they raised two children, Kelsey and Brandon. Glen went on to join the Grand Lake Volunteer Fire Dept. He served his community for 13 years up until his diagnosis with esophageal cancer 14 months ago. Glen did not let that slow him down, he fought everyday and he had the support of many throughout his battle.

He enjoyed his motorcycles, making fun plans for his family, camping, fishing, and caring for his clients at the group home where he worked. Glen was a friend to many and was always willing to lend a hand if he could – he had a heart of gold. He was a loving husband, a wonderful brother, and the best dad his kids could ask for.

He is preceded in death by; his paternal grandparents John and Anna Solem, maternal grandmother Ruth Toffan; his parents Arne and Beverly (Toffan) Solem; two brothers-in-laws and two sisters-in-law.

Glen is survived by; wife Delia; two children Kelsey and Brandon; three sisters, four brothers, brother and sister-in-laws; many nieces, nephews; extended family and many great friends; he will be greatly missed by all that knew him.