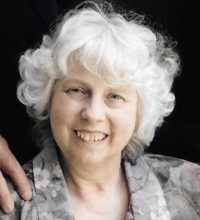 Gail was born August 4, 1943, in Bloomington, MN, the youngest daughter of Walter and Beulah (Ward) Chaffee. Gail fondly reminisced of her idyllic childhood, which often involved playing outside with her siblings, Arden, Evon and Miles. She enjoyed shopping thrift stores with her father whom she affectionately called “daddy.” Gail frequently recalled how protected and safe she and her sister felt with her brothers around. Gail relished the trips to the drag strip, the memorable nights cruising in Arden’s car, and roller skating until the rink closed down.

Gail graduated from Bloomington High in 1961, and soon after began working at Fort Snelling. Later, she took a position as a secretary at the local headquarters of the MN Conference of Seventh-Day Adventists. On May 17th, 1964, Gail Chaffee and Keith Schauer were married at Southview SDA Church. Gail set the tone of the new family by singing to Keith, “Together with Jesus, Life’s Pathway We Tread.” Keith had been drafted into the Army, so the new couple moved to Washington, DC. Eventually, they settled in MN and started their family, where Gail poured her heart and life into supporting and raising their four children.

A lifelong Seventh-Day Adventist, Gail served her church in whatever capacity she was able. She loved the Lord deeply and chose to live her life as a witness for Him. Hardly a conversation would pass without her finding a way to encourage others to make Jesus their friend too. Despite rheumatoid arthritis significantly limiting her mobility, she found great fulfillment in nurturing and encouraging everyone she came into contact with. She had a tender, empathetic heart, with an affinity for seeing the sunny side of life. Her attitude was relentlessly positive and upbeat, and her husband and children greatly benefitted from her constant, loving presence as she deftly balanced responsibilities both within the home and without. She is remembered as patient and unselfish – yet indomitable, our wife, mother, sister, and friend.

Now her trials are over and she is sleeping in the grave awaiting her Savior’s return, having “fought the good fight” and “kept the faith.” Nonetheless, we look forward to that day when the Lord returns and we can then rejoice as we are reunited with her. Her loss is mourned by her husband of 56 years, Keith of MN; son Whitney (Tammy) of WI; son Bradley (Marla) of WI; daughter Crystal Kaiser (Stefan) of MN; son Kevin (Chelsy) of MN; nine grandchildren; and her brother, Miles Chaffee of MN. Gail was preceded in death by her parents, her brother Arden Chaffee, and her sister Evon Kelstrom.