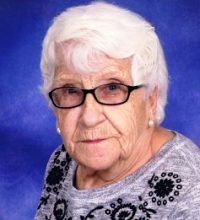 Estella “Tippy” Audrey Larson, 87, journeyed home to be with the Lord while surrounded by loving family at her son’s home on Friday, January 17, 2020. She was born August 28, 1932 to Walter and Esther (Runstrom) Bensen in Cloquet, Minnesota, the second of six children.

Tippy married George Larson on February 16, 1952. They lived first in Duluth, Minnesota, then Proctor, Minnesota, finally moving to a farm in Esko, Minnesota in 1959, where together they raised their family. In 1980, they moved out to Guernsey, Wyoming, living there for thirty years, returning to Duluth in 2010.

Tippy was a caring, supportive, loving mother, grandmother, and great-grandmother. She enjoyed walking, crochet, knitting, and sewing. Later in life, she took up painting which she enjoyed with some of her family. Tippy was a prayer warrior, spending 2-3 hours a day in prayer. This was a calling she and George had, which she continued until her journey home to Heaven. She will be dearly missed by her family and friends.