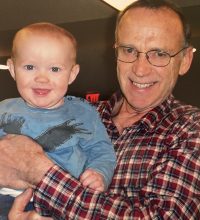 Services will be held at the Old Apostolic Lutheran Church of Duluth at 5755 Ryan Rd. Viewing will be from 6PM to 8PM on Sunday April 24. Funeral will be Monday April 25th @11:00AM.

Elton Gerald Tikka passed away at home surrounded by his family. He was born in Vancouver, WA, to Franklin and Eleanor (Foley) Tikka.

Gerald was a lifelong member of the Old Apostolic Lutheran Church. He enjoyed a simple life.