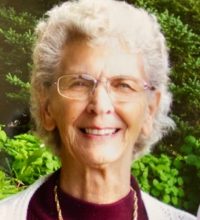 Eleathea (Lea) was born in Capac, Michigan to Iva and Harold Cope. She and her older brother grew up together on the family farmstead. Eleathea attended Capac High School and graduated with her class in the year 1945. She attended junior college and then moved to Washington, DC. While working at the Pentagon she met her future husband, Raymond Bruce Jenkins. They married and moved to New Mexico. After their first child Cindy was born they moved to Minnesota, Raymond Bruce’s home state. They settled in Bloomington and soon had a son, Bruce.
Eleathea worked as an elementary school secretary in the Bloomington school district until her retirement. She truly enjoyed her work there.
At the age of 90 she moved to Duluth to be closer to her son and daughter-in-law. She lived in a beautiful apartment on the edge of Lake Superior until her last day. She passed peacefully with them by her side. She will be greatly missed.
Preceding her in death are her parents Iva and Harold Cope, brother Robert Cope, husband Raymond Bruce Jenkins and son-in-law Al Broadbent.
Survivors include her daughter Cindy Broadbent, son Bruce Jenkins (Jane Jenkins), and grandchildren Shawna Tadych (Brad Tadych) and Henry Jenkins.