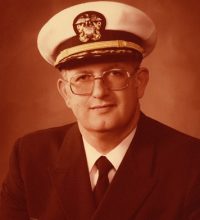 Edwin William McGrew, 86, of Duluth, Minnesota, went home to be with his Lord and Savior on Tuesday, December 3rd, 2019, at the Edgewood Living Community in Hermantown, Minnesota. He was born on November 21st, 1933, in Minneapolis, Minnesota, the second of six children born to Wayne and Ernestine (Walz) McGrew.

Ed grew up in Riverside after moving to Duluth in his early years. As a young man, he delivered newspapers on five different routes and assisted the milkman on his route to earn income for his family. He attended Morgan Park High School, graduating in 1951, and went on to enlist in the United States Navy, attending boot camp at Great Lakes Naval Training Center near Chicago. After graduating from boot camp, Ed attended advanced communications training in San Diego, going on to serve in Japan and Midway Island during the Korean conflict.

Following his active duty service, Ed returned to the Duluth area where he affiliated with the Naval Reserve in 1957 and studied at the University of Minnesota-Duluth, where he met Nancy Solberg. They married in 1959, and two years later, Ed received his B.S. degree in Education with a minor in English. In 1961, Ed completed his first tour of duty in the Naval Reserve, receiving his commission as a Naval Ensign one year later.

In 1961 Ed began teaching in the Duluth School District (ISD 709) at various schools around the city. He primarily was an elementary school teacher, but on occasion, he also served as a school counselor.

As the years progressed, Ed remained active with the Naval Reserve, eventually reaching the rank of commander. During his tenure, he served as Commanding Officer of various units, until his retirement in 1984. He taught through 1993, focusing primarily on math and computers later in his career. After he retired from ISD 709, Ed began a second career as a financial advisor for Waddell and Reed, where he worked for five years. Throughout his entire adult life, Ed also was very active in his local church, Salem Covenant in West Duluth, serving in various leadership roles including Church Chairman. Through all of these life-long opportunities, Ed made a significant and positive impact on people with whom he came in contact.

Ed is preceded in death by his parents, Wayne and Ernestine, as well as an older sister, Barbara Jean, and an infant brother. Ed is survived, and will be missed by, his loving wife of 60 years, Nancy, as well as his two sons Kevin (Paula) McGrew and Mark (Heather) McGrew of Duluth; grandsons Graham, Soren, Noah, and Adam McGrew; sisters Mary Lou Christensen of Minneapolis, Minnesota; Renee Bellingham (William) of Colorado Springs, Colorado; and Charlotte (Dave) Patchett of Baxter, Minnesota.

The family would like to thank the employees at Fresenius Kidney Care (Miller-Dwan) and Edgewood/Primrose Retirement Communities for their care during a critical time in Ed’s life, as well as the vast network of St. Luke’s Hospital staff.

Visitation will be at 9:30 a.m., followed by a memorial service at 11 a.m., on Saturday, December 28th, at Salem Covenant Church in Duluth. Military Honors will be provided by the Duluth Honor Guard. In lieu of flowers, memorials are preferred to Salem Covenant Church. A private committal will take place at the Minnesota State Veterans Cemetery – Duluth at a later date.