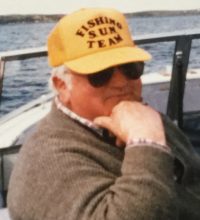 Earl W. Upton, 78, passed away peacefully Saturday morning, January 31, 2015 at St. Luke’s Hospice in Duluth. Saturday is the 56th wedding anniversary of Earl and Karen, and also her birthday. He was born October 19, 1936 to William and Molly Upton in Duluth.

Earl grew up in west Duluth and graduated from Denfeld in 1954. He proudly served in the US Army. Earl married Karen Curtis on January 31, 1959 and together they raised their boys in Duluth. Earl worked for the City of Duluth in the Water and Gas department, narrowly escaping an untimely death in 1966 due to a gas explosion. Earl recovered and continued working for 31 years until his retirement in 1996.

Earl was a member of the Legion Post 71. He enjoyed time fishing and hunting with his friends and family. Earl was always “the man we could count on when any one in family needed advice or a helping hand out of any situation we found ourselves in.”

He is preceded in death by his parents; and brother Bill.