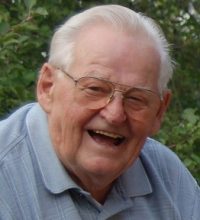 Dell was born with infantile paralysis in Duluth on Easter Sunday, April 1, 1923 to Emmett and Maye (Johnson) Hartwick. He was raised in West Duluth and at the family compound on Lake Dinham. He attended Denfeld High School through the 11th grade, when he left school to start his bricklaying apprenticeship with his Father, reaching journeyman status by age 19. At 19, he enlisted in the US Navy during WWII. He served in the 84th US Naval Construction Battalion (Seabee’s) building airstrips, docks, piers and marinas, until the war ended. This work took place in the Philippines, New Guinea, Australia, Malaysia, and several other places in that region. He worked through many battles and malaria – never giving up his duty.

Before he left for WWII, he met his future wife, Kathryn (Kaye) Olson at the Chester Park skating rink. She waited 3 years for him to return, and they married. They raised their 3 children in Lakeside and at Lake Dinham. He built 2 cabins on Lake Dinham and he and his family spent as much time there as possible. He loved it there.

Returning from WWII, he worked for a couple of masonry companies until he started his own: Hartwick Construction Company. He did residential as well as commercial work, most notably for the Duluth School District, the College of St Scholastica and the Congdon’s Glensheen mansion. He was well respected and noted for his perfection and hard work.

He was a lifetime member of the Masons, Scottish Rite, and Shriners.

As a child, Dell was a swimmer, a fisherman, and a marksman. As an adult, he described his favorite hobby as “hard work”. He loved building things. He was a very strong man, surviving infantile paralysis, being hit by a Model T as a child, and surviving malaria in the war.

Dell will be cremated, and ashes inurned at his cabin with his wife, where he was always happiest. Respecting Dell’s wishes, there will not be a service. The family will gather this summer at his cabin to celebrate his life.

A special thank you to St Luke’s Hospice for their gentle end of life care, keeping pain to a minimum and ensuring his peace and comfort. Thank you also to Edgewood Vista for their care over the last 3+ years.