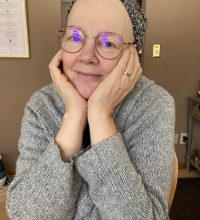 A Celebration of Maggie’s Life will be held in June, to be announced on Maggie’s Facebook page.

In lieu of flowers, donations can be made to Fond du Lac Tribal and Community College in Maggie’s name.

Maggie Kazel, a poet, teacher, and social justice advocate passed away peacefully in her home on April 15th in Holyoke, MN.  A non-smoker, she lived with lung cancer for three years.  She was surrounded by her wife, Kim, daughter, Lani, and a loyal circle of friends who cared for her at home.

Maggie touched many lives, a ripple effect of love that is wide and deep.  She taught at Red School House in Minneapolis in the late 1980s, where she guided youth to express themselves through the arts and theater.  Maggie then worked as a psychiatric counselor at Fairview Riverside Medical Center for eight years, and as a volunteer at Crysalis, a women’s counseling center.  She helped start KFAI community radio and hosted women-focused programming.  Maggie moved to Duluth, MN with her young daughter, Lani in 1995, living in a school converted into an artists’ living space.  There she excelled at her most important job, raising a strong and resilient daughter among a village of friends, aunties, and godmothers.  Maggie and Kim got married in Winnipeg during a snow storm in April 2008 and shared 14 years of love together.

In Duluth, Maggie worked with homeless people and those living with HIV and AIDS.  She was a program manager at Lutheran Social Services, the HDC Homeless Project, and the Rural Action Action AIDS Network between 2004 and 2018.  She also worked as an instructor and student counselor at the Fond du Lac Tribal and Community College.

Maggie was born on April 9, 1956, in Sioux City Iowa.  She was adopted by Ethel and Jerome Pohlen.  They moved to the suburbs of Washington, D.C., where her father worked for Cessna and the Federal Aviation Administration.  During high school in McLean, Virginia, Maggie’s family lived near and attended church with the family of Robert F. Kennedy.  Maggie admired Kennedy for his social justice work and often credited his influence for the direction of her life.  As a copy girl for the New York Times, Maggie was assigned the task of walking a copy of the freshly released Watergate transcripts through a tunnel to the Washington Bureau.

Maggie received a Bachelor’s Degree in Theater and Writing from the University of Minnesota.  For her B.A., she created a film called, “Our Essence Inheritance” which demonstrated the fight for Asian women’s rights.  The play won a Director’s Award for Outstanding Project.  She later earned a Master’s Degree in Education Counseling at the University of Wisconsin-Superior.  A published poet, her work appeared in various publications, including The Evergreen Chronicles, Sinister Wisdom, and the Thunderbird Review.  She published a book of poems “Seventeen Different Swan Languages” in 2011.  Maggie was proud of her poem, “Fear of Litany”, which was included in the book, “To Learn the Future – poems for Teachers” published by the Scottish Poetry Library in 2018.  The poem shared her love for teaching at Red School House from a first-year teacher’s perspective. Maggie served 10 years on the Center City Housing board.  She also served on the Clayton, Jackson, McGhie Memorial Committee and on the board of the Center for Alcohol and Drug Treatment, MN.  Because of her illness, Maggie’s career ended shortly after she was rehired at Fond du Lac Tribal and Community College as a counselor, which was her dream job.

Maggie’s colleagues and friends shared memories of Maggie and her mentorship on Facebook.  One co-worker quoted Maggie as saying, “We are one flip of a coin from our lives being turned upside down.  Approach this work from humility knowing you are no better than any of the people you serve and work with.”

In her poem published in “Migrations – Poetry and Prose for Life’s Transitions,” Maggie writes:

My redemption is the kind most easy to be missed

with the faithful in their p.j.s paddling softly around in grace

blessed to be together in our small and sleepy haze

reverent of each other, and humble by default in our soulful little chapel, we are the holiest of families

we are a holy us

She was preceded in death by her parents and Barry Skye, father of Lani.