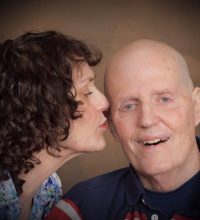 VISITATION: Saturday, January 30, 2016 at 2 P.M. at Anchor Point Church. Service and reception to follow, with military honors by the Duluth Combined Honor Guard.

David C. Surges, 68, died January 26, 2016, at Essentia Medical Center in Duluth, Minnesota, from Parkinson’s Disease caused by exposure to Agent Orange in Vietnam. He died in the arms of his beloved wife Vicki.

David was born on December 26, 1947, to Vincent and May Surges of Chicago. He graduated from Bishop Alemany High School in Mission Hills, CA, and Loyola Marymount University in California, and earned his MBA after returning from Vietnam.

David was a professor and most recently taught at the College of St. Scholastica. He loved teaching and was treasured by faculty, staff, and students alike.

David loved spending time with his kids and his beloved wife and caregiver Vicki. He was an avid sports fan and got to see his Los Angeles Kings win the Stanley Cup twice. He loved the Lord, knew he was going to a better place, and will be remembered by all for his gentle and kind manner.

David is survived and deeply missed by Vicki and his children Jason (Jennifer) Surges, Marisa Machado, Daniel Machado, Veronica Surges, Vinnie (Amanda) Surges, and Madeleine Surges, as well as Dave (Dora) Larsen (adopted and raised with loved by Al and Carol Larsen of Denver, CO). He is also survived by his granddaughters Kaylee Surges and Baby Girl Surges (due June 2016), siblings Susan Simons and Steve Surges, and several nieces and nephews. He was preceded in death by his parents.

In lieu of flowers, donations may be sent to the David C. Surges fundraising account at any U.S. Bank branch, or mailed to Veronica Surges, 540 Fairview Avenue North, Suite 300, St. Paul, MN 55104.

VISITATION: Saturday, January 30, 2016 at 2 P.M. at Anchor Point Church. Service and reception to follow, with military honors by the Duluth Combined Honor Guard. Services provided by Affordable Cremation and Burial.