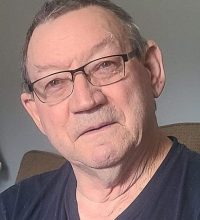 An informal celebration of life will be held on Friday, July 22nd 2022 from 1-3pm at The Copper Nickel in Aurora.

Dale E. Shamp, 69, of Aurora, died Friday, July 15, 2022 peacefully at home surrounded by his family after a hard fought battle with Dementia.

Dale was born May 29, 1953, in Crookston, MN to John and Adeline Shamp. Dale grew up in Palo, the oldest of 9 children. He graduated from Aurora-Hoyt Lakes in 1972.

Dale was a heavy equipment mechanic/operator for the City of Aurora for 31 years. Dale loved fixing things and could often be found in his garage working on a car or lawn mower for a friend or neighbor. Dale took pride in his work and loved when his children where out under a hood with him. Dale also enjoyed shooting pool, playing horseshoes, watching the Twins and was a die hard Vikings fan. Being a grandpa was by far his favorite thing and he loved his grandchildren immensely.

Dale was preceded in death by his grandparents, parents John and Adeline, his in-laws Patricia McGath, Dale McGath Sr. and Carl “Beaver” Peterson, a sister, Rhonda Hayden and nephew Joshua “Sim” LaValley, as well as many aunts, uncles and cousins and his two favorite pups Peanut and Moppy.

In lieu of flowers memorials are preferred.

An informal celebration of life will be held on Friday, July 22nd 2022 from 1-3pm at The Copper Nickel in Aurora.