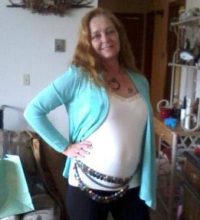 Born on January 17th, 1957, she was the daughter of the late John and Stella Erickson. Carol grew up in the small town of Kitzville and attended Hibbing High School. After receiving her GED she earned her technical degree in Thief River Falls, and worked several years as a radio personality. She married the love of her life Sheldon Allen June 3rd, 1983 and they started their life and family together in Zim, and eventually moved to Iron.

After moving to Iron, Carol spent many years working as a CNA at Arrowhead Senior Living Community in Eveleth. After the passing of her husband Sheldon she spent the remainder of her years with her partner Gordon Maki in Keewatin, MN. Carol had a love for music and enjoyed singing karaoke.  She also enjoyed hobbies like sewing, gardening and collecting antiques. Her favorite time was spent with her family hosting family gatherings and BBQs with her late husband. There are no words to describe the love that she had for all of her many grandchildren. It brings her family comfort knowing she has joined her love, Sheldon, in their garden in the sky.

She is preceded in death by her husband, Sheldon Allen; her parents Stella and John Erickson; and her brother, David Erickson.