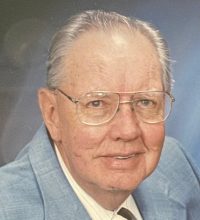 Arlo Sletten
Duluth resident Arlo A. Sletten passed away peacefully at BeeHive Assisted Living in Duluth, MN on August 19, 2021. Arlo was born to Christian and Alma Sletten on January 18, 1923 in Fosston, MN. He graduated from Proctor High School.
He was a proud WWII Veteran having served in the 10th Mt Division of the US Army. He worked as a machinist on the DM&IR Railroad, retiring after 42 years of service. Arlo married Shirley Anderson on August 24, 1949 and they were happily married for 51 years before Shirley passed away in December of 2000. In addition to his wife, Arlo was preceded in death by his parents, Christian and Alma Sletten, and brothers Cliff Sletten and Lloyd Sletten.
Arlo and Shirley had three children, Lowell Sletten of Tucson, AZ, Lauren (Donna) Sletten of Duluth, MN and Luann (William) Overby of Nashville, TN. Arlo is survived by seven grandchildren and four great grandchildren as well as many nieces and nephews. Arlo accepted Jesus as his Lord and Savior and was a long time member of Bethlehem Lutheran Church in Proctor, MN as well as Emanuel Baptist Church in Duluth, MN during his later years. Arlo’s family moved to Proctor, MN when he was young and he spent most of his life there.
Arlo was an excellent musician and played in a variety of bands around the Duluth area for over 40 years and passed on his musical talents to his sons. He sang in multiple choirs in the Twin Ports area. Arlo was very handy around the house; there wasn’t anything he could not build or fix. He also was an avid bowler and fisherman.
Upon retirement, Arlo and Shirley became “Snowbirds,” wintering in Paradise Park in Sun City, AZ for over 20 years. During their time in AZ, they developed a whole new circle of friends and would often visit or entertain guests from Paradise Park during the summer months. In AZ, Arlo stayed busy playing his keyboard with the “Paradise Park Jammers,” lawn bowling, golfing, playing water volleyball, taking up oil painting and singing in the choir.
In 2010, Arlo moved into Primrose Retirement Community in Duluth, MN where he became an “Icon” during the 11 years he resided there.
Arlo was fortunate to live a long and rich life surrounded by family and friends. Over his 98 years, he touched many lives and will be remembered lovingly by everyone who knew him.
No memorial service is planned at this time.
The family would like to express their sincere gratitude to Nancy Saari and the staff at BeeHive Homes Assisted Living who gave Arlo wonderful care and treatment in his final days as well as the staff of Kindred Hospice of Duluth who provided the loving medical care required.
In lieu of flowers or gifts the family is requesting donations be made to Kindred Hospice, 404 W. Superior St. #290, Duluth, MN 55802.
Arrangements by Affordable Cremation of Duluth, MN.