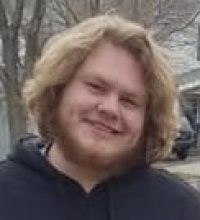 A memorial gathering will be held  later in the year due to Covid-19.

He was born to Katari Ashworth-Tafs and Christopher Tafs on October,7 1997 in Temple Texas and moved to Duluth, MN in September of 2000.

A.J. was a beautiful, loving and compassionate soul who enjoyed helping his friends and family when they needed him. He loved decorating the house for Halloween and Christmas, he also enjoyed working on his vehicles and computer. He was an avid gamer and more than anything loved his Ford F-150 Limited truck that he had bought just two months before he passed.

He was proceeded in death by his Grandmothers Mollie Ashworth, Mary Klang and his Grandfather Denis Klang whom he loved dearly.

He is survived by his parents Katari & Christopher, his loving sister Elizabeth and future Brother-In-Law Angelo Pitt, his wonderful nephews Benjamin and Franklin of whom he was so proud.His Grandfather Cleo Ashworth to whom he was very close, his Aunts Donna Ashworth & Carrie Ann (and her husband Tim Sorby),his Uncle Chad (and his wife Rachel Tafs),his cousins Robert, Scott, Mary Jean, Chad Jr. (C.J.) William and Parker.

He will forever be in our hearts and memories, we loved him dearly.