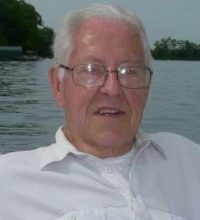 Albert George Sundquist, 91, of Duluth passed away Monday December 1, 2014 at Viewcrest Health Center. He was born April 23, 1923 to Edward and Hilma Sundquist in Duluth.

Albert graduated from Denfeld High School class of 1941. After graduation he enlisted in the Army Air Corps and was a bombardier on a B24. He returned from service and married Lorraine Carlson of Duluth. He worked as a bricklayer before moving to St. Paul to attend Dunwoody Institute majoring in construction estimating. Albert returned to Duluth and built a home on Fish Lake. He worked at Radford Millwork as an estimator and Duluth Lumber as a manager. In May of 1971 Albert purchased Hermantown Lumber with his wife Lorraine. He served as President and CEO until his retirement in 1984. After his retirement, Albert and Lorraine enjoyed spending winters at their home in Yuma, Arizona.

Albert served in many capacities in Fredenberg Township. He served as a member of the Volunteer Fire Department, a Justice of the Peace, and Building Inspector. Albert was also a member of the Duluth Lions Club serving as chairman of the Pancake Day in 1973, a board member of the Duluth Boys and Girls Club, and a founding member of the Hermantown Chamber of Commerce.
Albert enjoyed fishing, travelling, playing harmonica and singing, but most of all he loved spending time with his grandsons. He especially enjoyed the shark fishing trips to the Florida Keys.

He is preceded in death by his wife of 46 years Lorraine Marie, his parents, brother Carl Sundquist, sister Elsie Berntsen.